Our solar system is a vast and seemingly endless expanse that would take centuries to explore on your own. In this activity, you can explore the entirety of our solar system in just a few hours. Check it out!

During the day, Mercury can reach surface temperatures of 430°C! That’s twice as hot as your oven can get! The reason for this is because Mercury is the closest planet to the sun, “only” 58 million kilometers away. This close proximity to the sun makes Mercury one of the hottest places in our solar system.

Since Venus is further from the sun, do you think that the surface is warmer or cooler than that of Mercury? Surprisingly, Venus is actually hotter than Mercury, with its surface temperature reaching 465°C! This is because Venus has a much thicker atmosphere than Mercury, which contains the greenhouse gas Carbon Dioxide (CO2). CO2 traps in all the heat and keeps the planet burning hot.

What makes Earth inhabitable by humans? There are many reasons why we can survive on Earth, including all the proper ingredients for life like carbon and water, an insulating atmosphere to regulate the temperature, and a protective magnetic field to shield us from the sun’s harmful radiation. Earth is also located in what scientists call “The Goldilocks Zone”, because if earth was a bit closer to the sun, we would all roast, and if we were slightly further away, we’d all freeze.

In many ways, of all the planets, Mars is similar to Earth. If that’s the case, you might ask yourself – why aren’t there people living there? Despite the similarities, Mars has one distinct difference: the atmospheric composition. Mars’ atmosphere is much thinner and has a distinct lack of oxygen as well as an abundance of poisonous CO2, making it so humans can’t survive without space suits.

Saturn has a feature that makes it very distinct – it’s rings! But what are they made out of? Saturn’s rings are made of billions of pieces of small ice and rock, pulled in by Saturn’s strong gravitational pull.

Most of the planets are a dull orange colour, except for Uranus and Neptune. Why might that be? Neptune and Uranus get their blue colour from the high concentration of the chemical compound CH4, or Methane, in the planet’s atmosphere, which gives them a blue colour.

How Big is Our Solar System?

1. Cover your workspace with newspaper or a plastic tablecloth.

2. It’s time to start making some planets! Your first planet will be made from the ping pong ball because it is the smallest – that’s Mercury! Mercury is the smallest of the 8 planets and also the closest to the sun. Paint Mercury grey and orange.

3. Next, move on to the second planet from the sun, which is Venus. We will represent Venus with a small styrofoam ball. This rocky planet is similar in size to Earth. Paint Venus orange and yellow.

4. The next planet is one you’re certainly most familiar with – Earth! Using one of the small styrofoam balls, try your best to paint or draw in the continents in green and oceans in blue. Here’s an image to help: 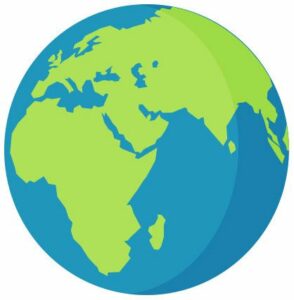 5. What’s the next planet in line after Earth? As a hint, it’s also known as “The Red Planet”. You got it – let’s make Mars next! Since Mars is pretty close in size to earth, you can use the final small styrofoam ball. Paint or colour Mars red.

6. The fifth planet from the sun is also the largest. Which planet is that? Jupiter! Make Jupiter by painting or colouring a large ball orange and yellow. If you want an extra challenge, you can add in the massive storm that travels across Jupiter, which is known as the Great Red Spot. This looks like a small red oval near the center of Jupiter.

7. The planet after Jupiter is Saturn, and it is famous for having a special feature – a massive set of rings that encircle the planet. Make Saturn by painting the other large ball the same colour as Jupiter. To make Saturn’s rings, cut a whole in the center of the paper plate, large enough for Saturn to fit inside. Then paint or colour the rings grey and tape Saturn in the center of the ring.

8. The next planet in line got its name from the ancient Greek Deity of the Heavens. That’s Uranus, the baby blue gas planet. To make Uranus, paint a medium sized ball a light blue.

9. You have reached the final planet in the solar system. What is the planet furthest away from the sun in our solar system? Neptune! Neptune is very similar to Uranus in size and composition. So, to make it, you can use your last medium sized ball. Neptune is a deep blue colour so we can paint it that colour.

10. With adult assistance, use the barbeque skewer to make a hole through the center of each of the Styrofoam balls. (Remember that Mercury is a ping pong ball, not a styrofoam ball!)

11. Cut 8 pieces of string of increasing length and tie them in increasing size to your coat hanger. Then, begin by taping the string to mercury and feeding it through the holes in the rest of your planets.

12. Finally, tie a large knot at the bottom of the string to keep the planets in place.

And there you go! You now have your own model solar system!

STEM Camp is a Canadian, bilingual, not for profit organization with a mission to inspire Canadian youth in the areas of Science, Technology, Engineering & Mathematics.